People in Grantham have been enjoying the cinema since at least 1916 when the first ‘picture house’ was opened by John Campbell. It seems almost that long that the Tories have been talking about the new cinema project for St Catherine’s Road.

A report was submitted to the SKDC Cabinet in February 2014 and in August 2014, the Council announced that £5million would be allocated to the development of a large multiplex cinema, restaurants and office space. The BBC reported at the time that the project could be completed by summer 2015.

In November of 2014 the Council granted itself planning permission to build a 6 screen cinema, with the condition that work would commence within three years but at that point there seems to have been an extended intermission (Don’t ask me why, as I wasn’t elected until the following year and like nearly everyone else in the Deepings I had almost no interest in Grantham whatsoever).

Three years later another planning application was approved and the work to construct the cinema was officially started by Cllr Jacky Smith (Con) on 1st May, 2018. 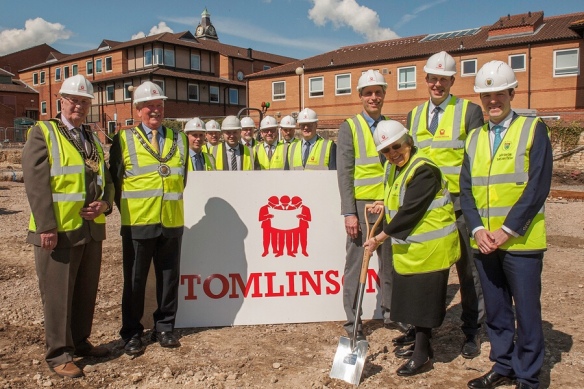 One might assume that when a local council starts building a cinema they would have plans in place. I don’t just mean business plans or seating plans, I mean plans of how to access the front door! South Kesteven isn’t the kind of authority to be held back by this kind of trivial detail so the construction of the steel infrastructure went ahead while hasty discussions took place in the council offices next door to agree a suitable entrance.

Firm proposals for a route from St Peter’s Hill through to the cinema foyer were presented to Cabinet on 12th July. The anticipated cost of the ‘St Peter’s Hill Re-development Public Realm’ project is £1.7 million (in addition to the £5.7m already committed to the cinema project). A request for this budget was submitted to Full Council on 26th July. At the Council meeting comments were made about the cost of the scheme but very few, if any, comments were made about the detailed design of the scheme. It was at this meeting that Councillors were informed that cinemas are unveiled at either Christmas or Easter. (The window of opportunity for a Christmas opening was already long passed so it appears we are aiming for a launch in the Spring).

Less than a month later, on 21st August, the hastily drafted plans were presented to the Development Management Committee (aka Planning Ctte). Appearing on behalf of the applicant, the Council’s Deputy Leader Cllr Kelham Cooke (Con) made a speech about the importance of the cinema project to the local economy, the future of Grantham, the reputation of the District etc. He mentioned how the project needs to press ahead with all urgency.

As a member of the planning committee, I tried to ask Cllr Cooke why, after four years in the pipeline, the plans were now being rushed through with such haste. The Chairman of the Committee, Cllr Martin Wilkins (Con), disallowed my question because previous procrastination on the project is not relevant to the planning process. I then tried to ask Cllr Cooke why a glass walkway had been removed from the plans. This question was disallowed because we are only supposed to ask questions about what is in each planning, not about what has been removed the application, even if alterations were made less than a week before the meeting. I then tried to ask about the practicalities of requiring staff to walk between their offices and the Council’s meeting rooms by ascending and descending flights of stairs and across public open spaces in all weathers but by this point the Chair had decided that he wasn’t going to allow me to ask any questions under any circumstances and so I stopped asking. I didn’t want him to expel me from the meeting as he had threatened to do during the previous meeting.

Then came comments from other members of the Committee including the Conservatives, most of whom could hardly have been more unquestioningly supportive of the scheme if they had arrived wearing T-Shirts emblazoned with an “I love the Public Realm project” slogan. Of course, none of these cheerleaders had predetermined the application before the meeting in any way, despite having voted to spend £1.7m on the project just four weeks earlier.

A vote was taken which would have been unanimous but for my abstention. I have nothing against the scheme in principle and I think it will create a better access to the cinema than the alternative which would have been wandering up a narrow alleyway at the back of a pub. However, I don’t think the Planning Committee made any attempt to properly scrutinise the application and since I wasn’t allowed to ask questions I was not prepared to vote for it.

So, it’s almost time to phone your sweetheart, fire up your popcorn maker, turn off your mobile phone and settle down to enjoy our feature pree-zen-tay-shun! Assuming no further delays, the new Grantham Savoy cinema will open at Easter 2019 which coincidentally is just two weeks before the District Council elections. Fancy that!