At last week’s SKDC Environment Overview and Scrutiny (OSC) Committee, a discussion took place relating to the food waste pilot scheme currently being run by SKDC in partnership with LCC.

One of the positive outcomes of the scheme appears to be a reduction in contamination of the recycling materials in the silver (recycling) bins. At previous meetings it has been reported that there is over 30% contamination meaning that an awful lot of what is recyclable is being sent to landfill as a result of people putting stuff in the wrong bin.

I used to work as a recycling officer at Gedling Borough Council but that was back in the 1990s and lots of things have changed since then, so I asked, not for the first time, for clarification of which plastics are welcome in the silver bin and which should go in the black bin. The answer was vague because the Lincolnshire Waste Partnership is still pontificating about what consistent message about recycling should be issued across the seven Districts of the county. When the Council takes away content of the silver bin it doesn’t get recycled by magic but instead gets taken to a Materials Recycling Facility (MRF, rhymes with Smurf). At the MRF a range of hi-tech technologies are deployed to sort the waste including magnets and compressed air. The MRF also uses range of low-tech methods including employing people at conveyor belts with massive gauntlets taking the tops of bottles and removing non-recyclable materials.

It was agreed that recycling issues should be discussed in more detail at the next Environment OSC and I hope to report back then. However, there were some interesting and, I dare say, helpful comments from the portfolio holder on the subject.

The easiest rule of thumb to help householders decide whether a plastic item should go in the recycling bin is to say that all plastic bottles can be recycled but please remove the lids because if you don’t then some poor fellow at the MRF will have to do it for you.

All plastic bottles can be recycled.

If that sounds to easy, then you can try to follow the logo instructions which appear on the back of most plastic and food packaging. It’s not as easy as 1, 2, 3 but I have been offered the following advice by Officers at SKDC which is consistent with the comprehensive guidance available at ‘Recycle Now’. That website also has over 20 other logos which are part of this ‘simple’ scheme but, for now, here are the main three.

This label is applied to packaging that is collected by 75% or more of local authorities across the UK, for example plastic bottles.

You can throw these items in an SKDC SILVER bin and not lose any sleep over your decision.

This label is applied to packaging that is collected by 20-75% of local authorities across the UK, for example some types of plastic packaging.

For example, I asked SKDC about a ‘Norpak’ margarine pot from Lidl. The SKDC internet guide to ‘What can I put in my bin?’ says  butter tubs should go into the silver bin. However, the Officer explained that actually, not all butter tubs are equal and this one is made of unusual or compound materials and be classed at a contaminant at the MRF. The safe bet is to put these items in the BLACK bin.

This label is applied to packaging when less than 20% of local authorities collect it across the UK, for example crisp packets.

SKDC would prefer you put these items in the BLACK bin.

When I got home from the meeting I discovered that, coincidentally, a sticker had been attached to my silver bin (see picture) which is really quite helpful. It pleads that we avoid putting the following in the recycling bin:

Nappies! – Why would you? but evidently people do.

Sanitary Products – Again, why on earth? Imagine the poor bloke at the recycling centre trying to sort those out from the newspapers.

Food waste – so, where practical, rinse out jars, bottles and tins 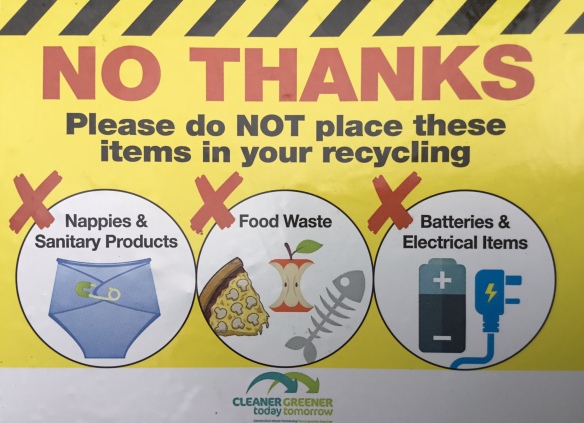