Committees were also elected. I have been returned to the Communities Policy Development Group (PDG) and will also join the Shareholder Committee of the Council’s ‘Local Authority Controlled Company’ if and when it is created.

My personal highlight of the meeting was the successful proposal to allow, for a trial period, Councillors to ask questions of each other as part of the Council meeting. It is ridiculous that this has not previously been permitted and I am glad the Council has changed its view on the issue since I first raised it back in July 2014.

The Communities PDG is currently completing a review of SKDC car parks. Market Deeping town centre was considered ‘out of scope’ but comments have been made regarding the only SKDC car park in Market Deeping (up on Halfleet beyond the Coronation Hall). It is has been mooted that this might eventually be released for development although there would be an issue concerning Public Rights of Way.

I have proposed two issues for consideration at forthcoming Communities PDG. Firstly, that the Council consider what further actions it can take to support volunteer activities across the District. Secondly, to propose that each of the Council’s committees meet at least once a year elsewhere than Grantham. This would hopefully increase the council’s accessibility, profile and in some cases educate Councillors about unfamiliar parts of the District.

I issued a press release concerning the dangerous Blenheim Road corner. This resulted in increased local awareness although it is unlikely to solve the problem of people driving too fast on a slippery road.
In response to Cllr Brookes comments about a footpath on the Persimmon estate I have raised the issue with the SKDC planning enforcement team.
I attended a meeting of the ‘Deepings First’ neighbourhood planning group but I am sure Cllr Shelton and others will report to you regarding that meeting.
I attended a Local Plan briefing for SKDC Councillors which outlined which sites have been offered as site allocations. There are nine in the Deepings which cover a very large area including the show ground on Millfield and the land behind Tesco. The Local Plan process will decide which sites are acceptable for development.

I attended the public session of the forum and raised the issue of the Blenheim Road corner. It is apparently not permitted for the police to conduct speed checks at that place nor for the Council to use its interactive speed sign. Comments were also made about the recent spate of burglaries and crime in the Crowson Way area of DSJ. 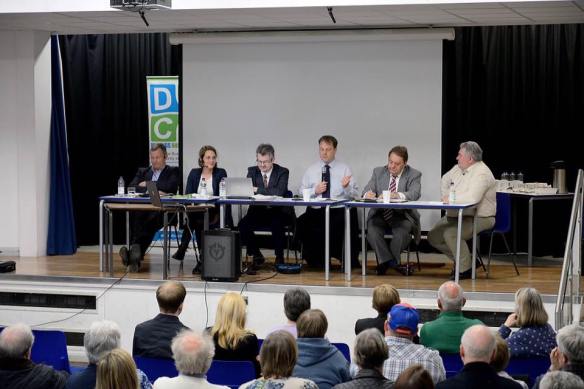 I was pleased to organise and to Chair a debate concerning the forthcoming EU referendum at the Deepings school on Thursday 5th May. This was promoted by the Deepings Business Club and involved speakers from different sides of the issue including John Hayes MP and Kat Boettge of the Green Party. Around a hundred people attended and most seem to have enjoyed it.

If anyone has questions please let me know. These reports are replicated on my Facebook page.