After years of campaigning, the Grantham Community Heritage Association has now got the go ahead to put a statue of Margaret Thatcher on St Peter’s Hill in Grantham.

The final green-light came at the South Kesteven Development Management Committee (aka Planning) where Councillors discussed the pros and cons of a statue. The meeting was even busier than usual with television cameras and press people filling up the chairs.

Before the debate I did ask the Chair to be especially patient with my contribution. In the past he has been quite quick to cut speakers off if he thinks they are straying onto issues not concerned with planning matters or the specifics of an application which, I suppose, is his job. In response he asked me “not to be political”. The application was for a 6-metre high statue of Margaret Thatcher – How can anyone speak on that without being political?

When I asked questions of the Officers report and the public speakers, the Chairman was quite keen to shut me down, e.g. when I asked if the statue could have a revolving pedestal “or is the Lady not for turning?”. To give the Chairman his due, he did allow me to read the speech I had written, without interruption:

This not just a plinth and a sculpture. This statue carries with it the reputation of Grantham.

This is a statue that no-one else wants. Westminster thought it would be the object of protest and turned it down… I don’t think you would be able to find a home for it in South Yorkshire or Liverpool as the trauma of the Hillsborough tragedy continues even to this day… I don’t think South Wales would want it, or the North East. Scotland has still not forgiven Thatcher for using them as Poll Tax guinea pigs… Margaret Thatcher will always be remembered in mining communities but, due to the enmity between Thatcher and the miners, there are no longer any mining towns or villages left in the UK.

Yesterday, this Council hoisted the rainbow flag to show its support for LGBT History month. This would have been illegal under Thatcher due to Section 28 of her Local Government Act which prohibited Councils from promoting homosexuality.

The Council has also recently decided to build new Council Houses. These will replace the ones that Margaret Thatcher forced us to sell off so many years ago. Most of those are now rented out by private landlords. Isn’t it funny how things work out?

Thatcher’s other achievements are well documented. In her first few years of office unemployment doubled to well over 3 million. Interest rates rose to 17%. There were riots on the streets of London, Leeds, Birmingham and Liverpool.

Incidentally, it has been suggested that the statue is displayed indoors. I disagree with this as sure the best place for a statue of Maggie Maggie Maggie is OUT, OUT, OUT!

There are many other chapters in the Thatcher story. Her successful campaign to retake the Falkland Islands, the indefatigable resolve that she showed after the Brighton bomb almost killed her and her entire Cabinet. Her role in the end of the Cold War and the collapse of the Soviet Union. It was, after all, a Russian communist newspaper that first gave her the nickname of ‘The Iron Lady’.

All things considered, I’m not a fan. Quite the opposite. However, the story of Thatcher and Thatcherism needs to be told. The shadow of Thatcherism looms over our political discourse in a much bigger way than any shadow that will be cast over St Peter’s Hill by this edifice. Thatcher and her legacy are now studied not only by politics students but by A Level history students. These kids will inevitably need field trips to better understand Thatcher and her background. Where better than Grantham Museum? And no doubt other people will make pilgrimages to see the statue (and pilgrimage is definitely the wrong word).

Obviously we’re only interested in the material planning considerations in this matter and I can’t see a planning reason to object but, more than that, I think the statue will have two positive impacts: firstly, it will be a boost for Grantham and the local economy; secondly it will help make people stop and think about Thatcher and all the things she did, and why some people still love her and why some people still despise her. I wouldn’t vote for Mrs Thatcher herself but I see no good reason to vote against this statue.” 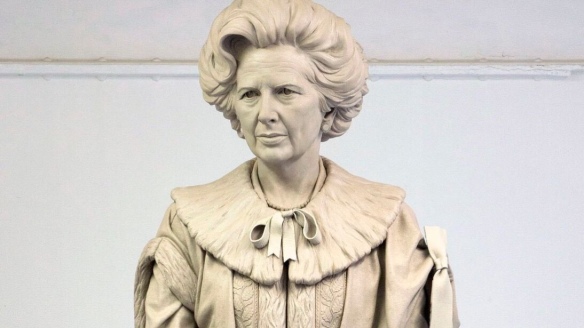 Other Councillors have a different opinion of Baroness Thatcher, including Cllr Peter Stephens, a Conservative Councillor and resident of the Manor House at Old Somerby, who reflected at one meeting last year:

“She did upset a lot of people. A lot of people in the mining industry lost their jobs but, and I bump into ex-miners quite often, I don’t find that they miss the work that much anyway. Unfortunately, [now] it’s lots of Europeans and other people who have to dig the coal up…”

3 thoughts on “#ThatchStatch – The statue that no-one else wants!”