At a ‘private meeting’ last week, the Grantham Charter Trustees decided, as usual, to welcome the Belvoir Hunt to St Peter’s Hill in the town on Boxing Day.

This is a Deepings-based blog and I don’t intend to make a habit of reporting news about Grantham but this week’s decision by the Grantham Charter Trustees is interesting for a few different reasons.

Who are the Charter Trustees?

The Grantham Charter Trustees are the custodians of the mayoral chain of Grantham which would otherwise have become homeless at the abolition of Grantham Borough Council in 1974. The functions of the Council were transferred to South Kesteven District Council but it’s a shame to waste a mayoral chain and a coat of arms and so the Charter Trustees were established to uphold the traditions and reputation of the town. The fourteen Trustees are the SKDC District Councillors who represent Grantham, i.e. two from each of the seven wards.

Why were they meeting in private?

Unlike a proper Town Council, the Grantham Charter Trustees have no website, no proper schedule of meetings, no published agendas and no published minutes (This is my understanding – I would be pleased to be corrected). Given that the Trustees only exist for ‘ceremonial’ purposes, you might be forgiven for thinking this doesn’t really matter. However, if ceremonial functions don’t matter then why have a mayor at all?

The meeting last week was particularly private because the subject matter was quite contentious. The question for discussion was whether or not to issue the traditional invitation to the Belvoir Hunt to assemble at St Peter’s Hill on Boxing Day

For many in and around Grantham, the Boxing Day meet is as much a part of yuletide festivities as roasting nuts or blubbing at a John Lewis advert. Since the fox-hunting ban was introduced in 2004 one might think that it would now be an innocuous event and merely another excuse to pass round the sherry. Unfortunately, the behaviour of the Duke of Rutland’s hounds has reignited public emotion around the event.

What’s wrong with the Belvoir Hunt?

Putting aside the hoary arguments concerning the association of hunting with class, privilege and money, the Belvoir Hunt remains controversial for reasons all of its own.

Earlier this year, senior hunt member George Grant and his son were given 13 month suspended prison sentences for an attack on a hunt monitor which resulted in a broken neck in March 2016. The pair also stole a video cameras and damaged a memory card to cover their tracks. Four other thugs were involved in the attack but neither the Grants nor the Belvoir Hunt have revealed their identities of the masked attackers despite requests by Sir Ranulph Fiennes and others.

In March this year, Head Gamekeeper of the Buckminster Estate was found guilty of charges brought under Section 9 of the Animal Welfare Act. He was caught on camera, by investigators from the League Against Cruel Sports, with a bag and net outside the disused building the day of the Belvoir Hunt meet. He was on his way to retrieve a fox kept captive in a brick shed since the day before.

In other news, in 2015 the Duke of Rutland’s Belvoir Castle Estate was ‘named and shamed’ for failing to pay the National Minimum Wage to 57 workers. 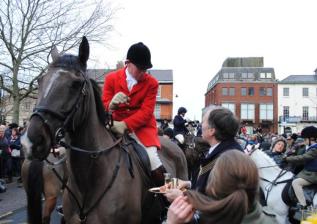 te the Belvoir Hunt into the centre of the town, they should be mindful of their responsibility not only to uphold the traditions of the town but also its reputation. The Trustees, as individuals or as a body corporate, should at least take the opportunity to express disappointment with the behaviour of the hunt and its staff over recent years and to demand that the huntsmen improve their act lest the time-honoured invitation be withdrawn.

Eighteen months ago, South Kesteven Councillors were queueing up to criticise the illegal practice of hare-coursing and demanding action by Lincolnshire Police on the issue (and rightly so) although at the end of the debate they didn’t support Cllr Phil Dilks’ motion to actually do something about it. Shortly afterwards, ‘Operation Galileo‘ was launched which has had a significantly reduced the incidence of hare coursing in Lincolnshire. It is a shame that Councillors aren’t similarly outspoken about illegal foxhunting though not really surprising as some Councillors are active members of local hunts (NB. I am definitely not accusing any Councillors of illegal foxhunting).

Last week’s decision has attracted much criticism from Animal Rights campaigners including a Facebook group named ‘Grantham against Bloodsports’. In response to a string of emotional criticism of the SKDC Councillors I posted the following suggestion that people express their disgust via the ballot box:

With all respect, if you don’t like the way SKDC (and the Grantham Trustees) works then you need to start organising to get rid of them (us?) next May. As an Independent I have been able to achieve small victories and hold up a mirror to the nepotism and secrecy at the Council but when nearly all the Councillors are Tories who toe-the-line on every vote it is difficult to make any impact. At the last Full Council I raised the issue of secret meetings but obviously the Tories voted for the status quo. If you want change then you need to start planning now. I would be happy to help.

A few hours later I received an e-mail from a Conservative Councillor claiming that by posting on Facebook I was: a) aligning myself with people who had threatened fellow Councillors; b) condoning disgusting and vile behaviour; and consequently c) breaching the 7 Nolan Principles.

I take standards of behaviour in public life very seriously and consider the accusation very serious. I utterly refute the allegations and have therefore forward the accusatory e-mail to Senior Officers at SKDC who have agreed to carry out an investigation. I suspect I am the first SKDC Councillor to ask for an investigation of his own behaviour! It happened once before when I was a Market Deeping Town Councillor and I was villified by fellow Councillors for telling a member of the public what was said about her during a public meeting. There were no repercussions then and I doubt very much if there will be any this time either.