Fixed Odds Terminals are a scourge of our society. They lurk in high street bookmaker shops waiting for vulnerable gamblers to fritter away their wages. The consequences can be devastating for victims, their families and wider society.

Each machine allows a £100 stake to be gambled every 20 seconds. In 2016, gamblers in South Kesteven lost over £2.2million to these machines of which there are over 50 in the District. The figures for Peterborough are much higher as it is well-known that the machines are more prevalent in areas of financial deprivation. 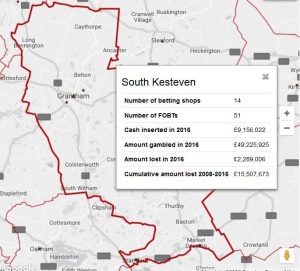 This is why, in November 2017, I proposed a motion to South Kesteven District Council recommending that the Council support a reduction of the minimum stake from the current £100 down to £2. The motion was passed (unanimously as I recall) and the council responded to the Government consultation accordingly.

I was both surprised and delighted when it seemed that the Conservative government had listened to the consultation and were prepared to take action on the issue. Unfortunately, during this week’s budget the Chancellor, Philip Hammond MP, has decided to kick the can down the road and not implement the reduction in the £100 stake until October 2019.

Some Ministers have attempted to defend the delay with mealy-mouthed comments about jobs and the high street. These are patently nonsense. No customer victim of high-stakes betting machines is going to make a spur-of-the-moment visit to Waitrose on the way home. 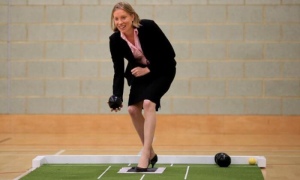 Sports Minister Tracey Crouch MP has resigned over the issue. It is a refreshing change in today’s political landscape to see a Ministerial resignation on a point of principle rather than because of personal scandal (e.g. Michael Fallon), impropriety (e.g. Priti Patel), misleading parliament (e.g. Amber Rudd) or personal ambition (e.g. Boris Johnson).

The only winners from FOBTs are the people who own the bookmakers and the machines are a means of directly transferring income from the poor to the rich. They should be banned this very hour!

1 thought on “#FOBT machines to linger despite @southkesteven opposition.”